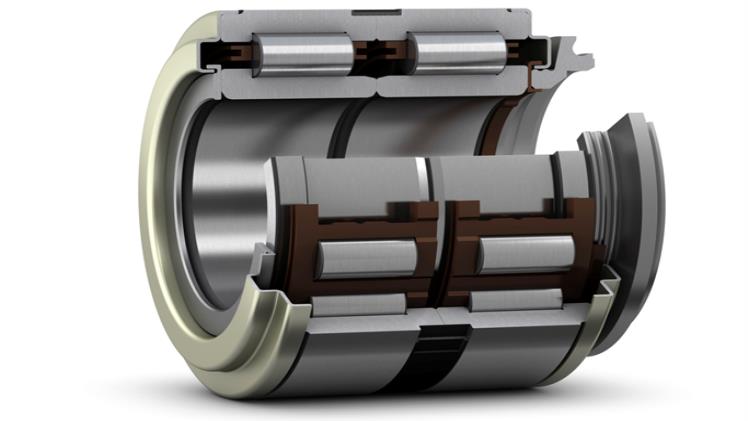 A set of NJ3226 and NJP3226 bearings are installed at each end of the railway passenger car axle (Fig. 1). The bearings not only bear the full weight of the car body, but also bear the axial and radial impact loads generated during the operation of the passenger car.

The geometric dimensions of the inner ring, outer ring and rollers of more than 20 sets of normal bearings were comprehensively inspected, and it was found that both ends of the element line of the inner ring raceway of NJ3226 were inclined downward by about 1 ~ 2 μm (designed to be straight lines) , the transition area is located at the raceway 8 to 10 mm away from the inner ring rib; the roller element line has been corrected, and its two ends have a slope of about 8 mm, the designed roller element line. After correcting the shape of the plain line of the roller, the problem has not been solved, but it is certain that the machining quality of the plain line of the NJ3226 bearing roller and inner raceway is one of the systematic factors that cause its premature failure. Since the premature failure rate of the bearing is very low, it can be seen from the above analysis that the premature failure of the NJ3226 bearing is the result of complex multi-factor coupling.

The motion force state of the axle is shown in Figure 6. In the figure, F1, F4 are the radial impact loads on the axle; F2, F5 are the pressure of the railway passenger car mass on the axle; F3, F6 are the supporting force of the railway passenger car wheel on the axle; F7 is the axial impact load. F2 and F5 are in balance with F3 and F6 respectively; M1 and M2 are the additional moments generated by F2 and F3 and F5 and F6 due to different points of action, which cause the axle to produce a certain deflection deformation, as shown in Figure 7. Axial and radial shock loads are variable loads whose values ​​are affected by road conditions, passenger onboard mass, and operating speed. F1, F2, F4, F5 are transmitted to the axle through NJ3226 and NJP3226 bearings installed at the axle end.

Since the rolling element line is a logarithmic curve, there is a slope of about 8 mm at both ends due to over-correction during processing; at the same time, the inner raceway element line has a length of 1.8 mm from the rib. 5 to 2. 0 μm subsidence (a total of 20 pieces of inner circle are detected, all the shapes of the prime lines are the same), so that

The stress at the end of the inner raceway is lower than that in the middle. However, due to the flexural deformation of the railway passenger car axle, F1, F2, F4, and F5 are unevenly distributed on the NJ3226 and NJP3226 bearings, so that the NJ3226 bears a larger load than the NJP3226, and the contact stress distribution inside the two bearings changes significantly. Stress concentration occurs, the maximum stress is located at the raceway part 8 mm away from the inner ring rib of NJ3226, 9 is the additional load caused by the axial impact load F7. F7 is mainly borne by the NJ3226 inner ring rib, and transmitted to the roller, which generates a force F’7 on the roller to push the roller to interact with the outer ring rib, and generates a force F8 on the corresponding roller. Because the action points of F’7 and F8 are different, an additional moment M3 is generated on the rollers, which makes the rollers deflect, and the rollers act on the inner ring under the deflection to generate force F9, which acts with the outer ring and generates forces F10 and F9. The reaction force F’9 acts on the inner raceway, which further increases the force on the inner raceway, and the two ends of the prime line of the NJ3226 inner ring raceway are inclined downward and the roller prime line is overcorrected, so that the acting point of the force is located at a distance from the inner race. NJ3226 The raceway part of the inner ring rib of 8 mm further increases the stress of this part. At the same time, the reaction force F’10 of F10 acts on

In addition, most users generally choose the inner ring raceway diameter of NJ3226 to be 0.005 mm larger than that of NJP3226 during installation, so as to increase the force of the NJ3226 inner ring and reduce the deflection of the journal. Any increase in contact stress may lead to a sharp decrease in bearing fatigue life [1]. Therefore, this measure is also one of the factors that cause the early fatigue spalling of railway passenger car bearings to mainly occur on NJ3226 bearings.

The proportion of early fatigue spalling of railway passenger car bearings is about 0. 2%, which means that, although there are system factors that lead to premature failure of NJ3226 bearing under normal operating conditions, these system factors are not enough to cause early fatigue spalling of the bearing, but it is related to one or more other factors. The superposition of accidental factors results in a very small percentage of early fatigue failures of railway passenger car bearings. These contingency factors are divided into the following two types. (1) The discreteness of the machining dimensions of each part of the bearing. For example, NJP3226, NJ3226 bearing radial clearance is 0. 12 to 0. 17 mm, if a pair of NJP3226 and NJ3226 bearings are used in a pair, the radial clearance of the NJP3226 bearing is larger, while the radial clearance of the NJ3226 bearing is smaller, which will inevitably lead to an increase in the load on the NJ3226 bearing and a decrease in the load on the NJP3226 bearing. Small. (2) Quality defects such as bearing materials, heat treatment, grinding burns, etc. For example, small inclusions inside the material, slight network and ribbon carbides, local slight depletion of carbon and

Local minor burns, etc. These quality defects will cause the fatigue strength of the inner ring raceway of NJ3226 to decrease.

(3) Strictly control the inclination of the NJ3226 inner ring raceway within the tolerance, the inclination should be from low to high from the rib to the small end face.

(4) Prevent the downward slope of both ends of the inner ring raceway line of the NJ3226 bearing.

(6) Reduce the dispersion of dimensional tolerances and geometric tolerances of parts such as the inner ring, outer ring and rollers of the bearing. Through strict control of bearing production and installation, the early failure accident rate of NJ3226 and NJP3226 bearings has been reduced by 60%.

Woodland shoes are a classic style that is both comfortable and stylish. They feature premium leather materials and a lace-up closure for an easy, secure fit. They’re also made to last, with a variety of colour options to choose from. Whether you’re looking for a pair of shoes for work, an evening out, or your casual wardrobe, there’s a style and colour that suits your tastes.

How does an email finder tool help a sales team?